This event has already taken place! Please make sure you are in the correct year. ×
Apr
20
Saturday
Apr
20
Sat 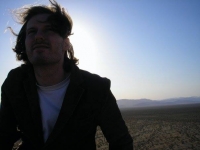 "Touches of the Moody Blues, but filtered through a west-coast harmonic sensibility." -DPRP

Michael Trew is a songwriter, native to the Pacific Northwest. In early years, he spent time with teacher Chandana Dixit, exploring classical Indian music. He later formed indie rock group Autumn Electric, releasing five albums and touring nationally (2008-2015). During this time he performed as opener for European artist Marius Ziska, during his US tour.
In 2016, Michael signed with Natural Cut Records to record his debut solo effort, Waiting in the Wings. Recording in the wintry mountains of northern Washington, much of the album focused on acoustic music he'd been writing and saving for several years. Many close friends were called in to perform, write and arrange the various orchestral and experimental rock textures. Released in fall of 2017, the album received warm reviews, and drew comparisons to the melodic and expansive rock of The Moody Blues and Big Big Train. A tour of the western United States followed in early 2018, along with appearances at Seattle's oldest and newest music festivals (Northwest Folklife Festival & Upstream Festival 2)
Advertisement
Links: http://www.michaeltrewmusic.com